WELCOME TO THE VILLAGE OF
​MILFORD CENTER, OHIO 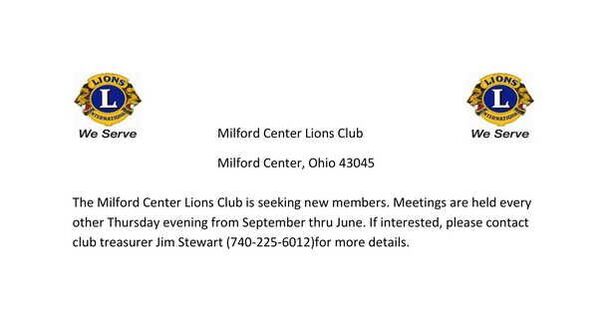 A Look at the Village of Milford Center's History

​Milford Center was called Milford when it was platted in 1816. Most likely it was so named as the location of the mill at the ford in Big Darby Creek, built by George Reed in the first decade of the 19th century. The mill was rebuilt in the 1830s and again in 1874 and stood as a feed store when it was razed in the 1960s. Today the Dollar General Store occupies the site of the mill and the Erb Buggy Works. Until 1821, the Village served as the County seat of Union County before it was relocated to Marysville. The building currently in Liberty Park is a scaled replica of the first Court House. This replica was erected in 2003 commemorating Ohio’s bicentennial year. A Post Office was established in the Village in 1823 and in 1829 the community was renamed Milford Centre as there was another, larger town called Milford in Ohio. Milford Centre was incorporated in 1853 and renamed again in 1893 to Milford Center. The building now known as the Village Fiscal/Utility Office (former town hall) once was the jail, complete with an iron barred cell and a constable.
*Special thanks to Jeff Graves for additional pictures for the website!
​Over the life of the Village, seven Christian congregations have called Milford Centre and Milford Center home. Currently there are two, a Church of Christ in Christian Union and a United Methodist Church. Gone are a Church of God, the Christian Church, a Baptist Church, a Roman Catholic Church, and a Presbyterian Church. The remains of the Presbyterian building now houses Chris Kise’s garage. Today’s ‘downtown’ is a faded memory of yesteryear. Where the present Marathon Station is located the Richter Hotel once stood. The hotel served visitors to the Village, especially salesmen who arrived on the Big 4 Railroad from Columbus and hired local livery transportation to cover their surrounding territories. In the 1960s, the hotel building housed apartments, the larger of two grocery stores, a beauty salon, a dress shop, a ‘five and dime’ store and a tavern. Until the larger grocery remodeled to add a ‘locker plant’ (home freezers were rarities) the hotel building also housed The Luxmar Movie Theater. In the 1950-60s, in addition to the second grocery, there were two hardware stores, a machinery repair shop, a hatchery, a shoe store, a shoe repair shop, an electrician’s business, a plumbing and heating business, a second tavern, a jewelry store, an insurance agency, a restaurant, a doctor, a dentist, two barbers, an auto repair shop and four service stations (they checked your oil and cleaned your windshield) in the Village. Bulk candy can still be purchased at the Marathon station from the same display case that once tempted folks in the ‘five and dime.’ The population of the Village was 210 in 1850, grew to 372 by 1870, and almost doubled to 718 by 1890; thereafter the numbers declined until gradual growth resumed in 1940. At the census of 2010, there were 792 people, 299 households, and 220 families living in the Village. It is likely that those numbers are a bit larger today.

​Honor our military veterans by visiting the memorials at Liberty park !